The Lewistown Satellite Airfield was constructed in Lewistown, Montana, during World War II as one of four training facilities for B-17 Flying Fortress crew members and included a storage site for the top secret Norden Bombsight. The Norden Bombsight, a synchronous stabilized bomb-aiming device, was considered fundamental in America's precision bombing doctrine. The extant bombsight storage shelter which housed the bombsight is one of a few known buildings of this type remaining in the United States. With construction complete by 1942, Lewistown was built as a satellite field for Great Falls Air Base. Squadrons were trained in the navigation of the B-17 in addition to receiving gunnery and bombing practice. Once their training was complete, the men were sent to the European front. The airfield was in operation during a 12-month period between 1942 and 1943 and thereafter deactivated.

The historic district retains 23 original structures within its boundaries, including the bombsight storage building. The Norden Bombsight was stored in a small one-story building constructed of poured concrete. Divided into two vaults, the Norden device was only accessible through bank vault doors. Other extant buildings include a large hangar, the operations building, an armament building and crew chiefs building. The field was declared surplus in 1948 and has served the local community as a municipal airport ever since. - National Park Service, National Register of Historic Places.

The Montana-trained squadrons flew at total of 1,263 combat missions, dropped 71,128 tons of bombs, lost 548 aircraft and shot down 1018 enemy aircraft without ever turning away from a mission. They earned Presidential Unit Citations with valor and fortitude over Leipzig, Oschersleben, Regensberg, Schweinfurt, Steyr and Zwickau. Assigned to the Mighty 8th and 15th Air Forces, the unwavering courage and unbowed bravery of airmen from this Montana airfield shines as this nation's bright pride.
Read More
Read Less

Lewistown Airport is located 1 mile southwest of Lewistown. Turn off Highway 87 West at Montana Department of Transportation and follow Airport Road and signs to terminal building. 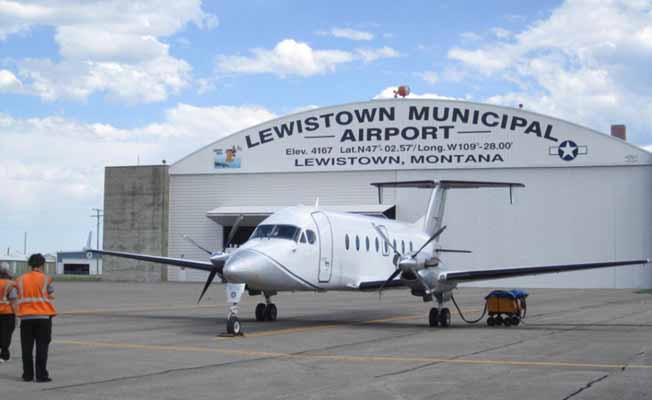