The present day Jersey Lilly had its beginnings as a bank in 1914, known as Wiley, Clark and Greening Bankers. On January 1, 1918, the bank was reorganized from a probate bank to Ingomar State Bank; it first received a federal charter, and operated as the First National Bank of Ingomar from January until July 21, 1921, when it closed. On October 13, 1921, the bank went into receivership.

In 1933, Clyde Easterday established the Oasis Bar in the bank building; Bob Seward took over the bar in 1948 and named it the Jersey Lilly after Judge Roy Beans bar of the same name in Langtry, Texas. Bob's son, Bill purchased the building in 1958, and the Jersey Lilly continued under his ownership, serving as the local watering hole, cafe and general gathering place for area residents until August, 1995, when it was purchased by Jerry Brown. In 2011 the Jersey Lilly was sold to Boots Kope and June Nygren.

The Jersey Lilly is internationally known for its beans and steaks. The cherry wood, back bar of the Jersey Lilly is one of two which were transported from St. Louis by boat up the Missouri and Yellowstone rivers and installed at Forsyth in the early 1900s. This bar was stored at Forsyth during Prohibition, sold to Bob Seward, and installed here in 1933; the other back bar was destroyed in 1912, when the American Hotel burned in Forsyth. The original frame school building, the Jersey Lilly and Bookman Store were all placed on the National Registry of Historic places in September, 1994. Both the school building and the Milwaukee Depot are now privately owned.
Read More
Read Less

The Historic Lilly Bar and Cafe is located between Roundup, Montana, and Forsyth, Montana on US Highway 12 in east central Montana in the town of Ingomar. 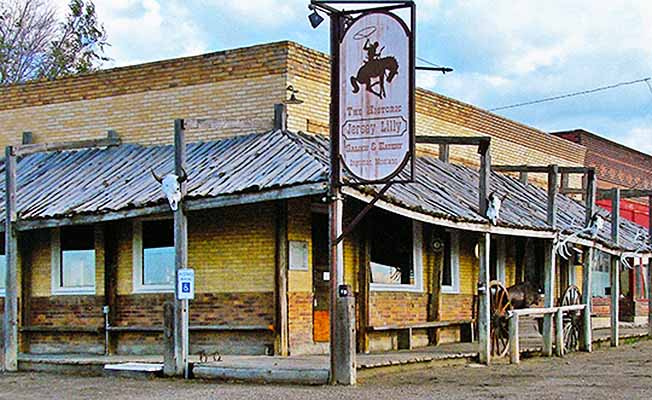