Wheatland County has learned how to put the WIND to work thanks to Invenergy Services of Chicago. The Judith Gap Wind Energy Center was built in 2005 between Harlowton and Judith Gap. Ninety towers rise 262 feet above the prairie, supporting General Electric turbines which are powered by three 126-foot blades. Each turbine is capable of producing 1,500 kilowatts of power. Expected annual output is 450,000,000 KW hours. All power is sold to Northwestern Energy under long-term contract. There are plans for visitor kiosks, to be located at the Wind Farm entrance and at what is to be called Blade Park in Judith Gap.

The power generation nacelles sit more than 250 feet in the air atop a column built of three, 85-foot segments. Each of the three fiberglass blades is 126 feet long, which means at the top of its arc, each blade tip will be nearly 400 feet in the air. According to a wind power map for Montana, the wind farm is in a Class 4 and Class 5 wind area, with average wind speeds from 15.7 to 17.9 miles per hours at 50 meters (162.5 feet).

These types of turbines start spinning when the wind gets above about 6 miles per hour, and power production begins at 7.8 mph. Because of inconsistencies in the way the wind blows, wind turbines generally work at 30% of name plate capacity; these turbines run at maximum capacity at 33.5 mph. In high winds of 56 mph or more the turbines shut down to protect the turbine.
Read More
Read Less

The farm sits on both sides of Highway 191 between Harlowton and Judith Gap. Main access is between mile markers 10 and 11. 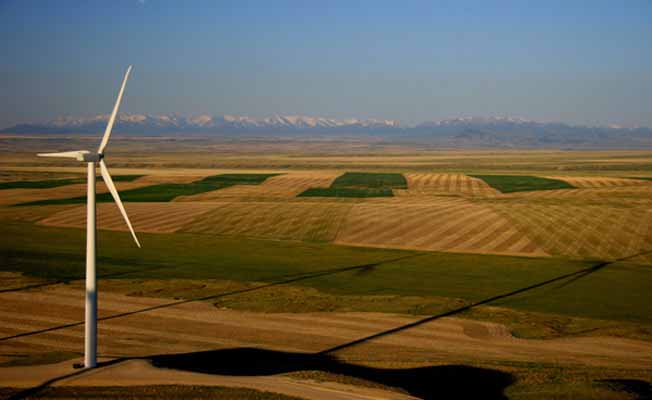