Hundreds of peaks separate more than thirty rugged drainages for nearly 90 miles along a dramatic mountain front stretching from the South Fork of Lolo Creek south to where rocky ridges break abruptly into the West Fork of the Bitterroot River. From the lofty vantage point of any of the 9000 to 10,000-foot peaks the impression is one of barren rock-granite, gneiss, and schist-from the jagged crest of the Bitterroots to the valley floor. A closer look reveals sheer walls, cliffs, tumbling waterfalls, hanging valleys, subalpine lake basins, and a glaciated terrain so rough that, in comparison, most other Montana mountains seem like gently rolling hills.

Although much of this primeval land is austere and treeless, there are surprising pockets of wildlife. Elk summer in lush basins along the divide and hide in heavily forested canyons during the fall hunting season. The native bighorn sheep herd in Sheephead and Watchtower creeks at the southern end is genetically pure. The sheep have a unique learned migration pattern between winter and summer range.

During the past decade there has been a modest increase in recreational use within the Wilderness. The exception has been day use which appears to have risen markedly, particularly in the northern canyons west of Stevensville. Hikers only slightly outnumber horse users except during the fall when the vast majority of visitors are hunter with riding and packstock.

Trails are well-distributed throughout the wilderness. Still, eleven pristine areas without trails have been identified within the wilderness, comprising about 10 percent of the Selway-Bitterroot. The largest is some 26,000 acres of alpine splendor along the jagged Bitterroot Divide surrounding the Heavenly Twins, which offer several mountaineering routes and wilderness solitude.

If you avoid the heavy use areas, especially during weekends and holidays, you won't be disappointed in any of the more than twenty major drainages flowing east from the Bitterroot Mountains. Typically, the access trail is at about 3,400 feet, close to the mouth of a deep, rocky canyon. It then parallels a rushing stream for 6 to 8 miles. Soon this prototypical trail climbs a steep moraine to a high lake basin just below the crest of the Bitterroot Range.

There are many winter ski mountaineering possibilities such as 9,096-foot Lolo Peak on the north end, 8,886-foot Gash Point west of Victor from FR 737, and the apex of the wilderness-10,157-foot Trapper Peak on the south-eastern edge. Trapper is a 5-mile walk up Trail 133 from a switchback on Lavene Creek Road (FR 5630A). To reach the trailhead drive about 11 miles up the West Fork road south of Darby to the Lavene Creek Road and follow the sign for about 5 miles to where the trail takes off. The final 2 miles to the summit are above timberline and especially scenic.
Read More
Read Less

Located in southwestern Montana and southeastern Idaho. How to get there: North End From Lolo, 10 miles south of Missoula on US Highway 93, drive about 9 miles west on US Highway 12. Turn left (south) on FR 451 and drive about 4 miles to the South Fork Lolo Creek trailhead for Trail 311. South End During winter drive 4 miles south from Darby on US Highway 93 and head up the West Fork Road (FR 91). Go about 13 miles and turn right on FR 373 before the West Fork Ranger Station. If the road is impassable park at the bottom and begin climbing the northwest-trending ridge to 7,753-foot Boulder Point. During the summer drive 4 miles south from Darby on US Highway 93 and go about 6 miles up the West Fork Road. Just past the Trapper Creek CCC Center, turn right on FR 5634 and drive 9 to 10 miles to the Baker Lake trailhead for Trail 234. 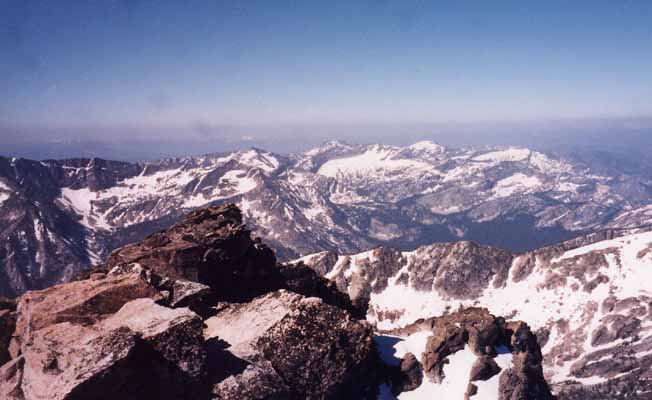