It's that time again ... THE NATIONAL FINALS SKI-JORING RACES will take place, in Red Lodge. It's WINTER FUN ... WESTERN STYLE, and we're hoping that you will join us!

The Red Lodge Ski-Joring Association each year hosts The National Finals Ski-Joring Races. It is a two-day event which, this year, takes place at the Home of Champions Rodeo Grounds, west of Red Lodge. Originating in the Scandinavian countries as a form of winter transportation, the west has transformed this into an action packed competition wherein teams negotiate a 700+ foot course, the horse taking a track to the inside of the course while the skier in tow, negotiates the 20-some slalom gates and four jumps in hopes of completing two fast, clean runs which isn't easy at speeds sometimes topping 25 mph. Prize money is awarded for the fastest combined times for the two day event as well as fastest times each day. The skier must be upright and on at least one ski when crossing the finish line and a 5 second penalty is incurred for each missed gate. There is a separate longest jump competition wherein the rider and horse pull their skier over one jump for the longest distance each day. Distances have exceeded 60 feet.

The crowd is as much a part of the fun as the competition, constructing elaborate weekend shelters on the back of flatbed trucks to protect them from the 'anybody's guess' weather. BBQ and tailgate professionals, football tailgaters have nothing on these folks. Competition starts at 11:00am each day and takes place at The Home of Champions Rodeo Grounds, west of Red Lodge on State Highway 78.

The National Finals Ski-Joring Races are exciting for the spectators and challenging for the competitors with up to $20,000 in cash and prizes being awarded in different divisions. Junior prizes include a colt and a new pair of skis and there are champion buckles and as well as the cash for the adults. It's winter fun, western style and it's Montana's own form of March Madness! 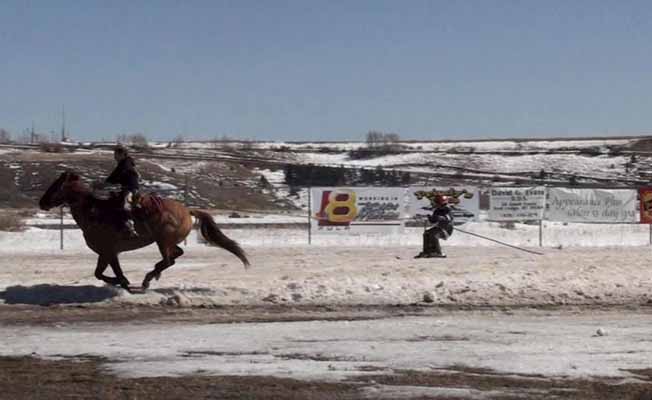 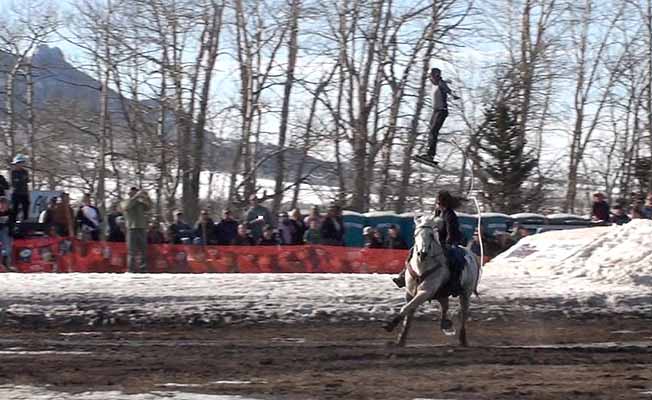