According to most historical sources, the Salish Indians called the present Mount Jumbo 'Sin Min Koos,' which roughly translates into 'obstacle' or 'thing in the way.' David Thompson called it 'Brown Knowl' when he climbed in on February 26, 1812. Later, eastern settlers thought Mount Jumbo looked like a sleeping elephant and miners christened a nearby copper mine 'Jumbo Lode' in honor of Barnum and Bailey's most famous attraction. Locals saw the landform as a reclining elephant with its rump in the Clark Fork River and its trunk pointing north toward the Rattlesnake Mountains; the round grassy mountain became known as 'Elephant Hill.' Later, the feature was renamed Mount Jumbo.

There are two major access points to Mt Jumbo from the Rattlesnake Valley: From Van Buren Avenue in the Lower Rattlesnake turn right on Cherry Street to reach the L trail and the south trail. About 2 miles up Van Buren/Rattlesnake Drive turn right at Lincoln Hills and drive to the end of the paved road to access the Mt Jumbo Saddle Trail. 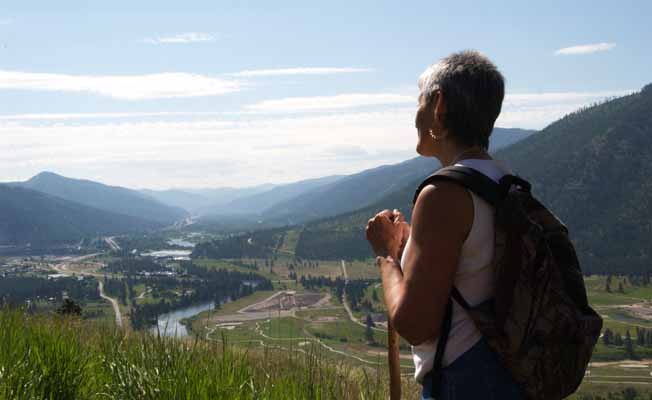