The Mission Mountain Range is the gateway to the Mission Mountain Wilderness Area, a 73,877-acre paradise for hiking, camping and fishing. An area of outstanding scenic beauty--rugged, snowcapped peaks, several small glaciers, alpine lakes, meadows and clear cold streams. Popularly known as the American Alps, the overpowering western face of the Missions pierces the sky almost 7,000 feet above the valley floor. The apex of the range is a glacier-studded 9,280-foot McDonald Peak in the rugged south, where a dozen other summits rise above 9,000 feet. Permanent snow fields feed hundreds of gem-like tarns (glacier formed lakes) in one of the highest densities of alpine lakes in the Northern Rockies. Waterfalls are abundant, with the best known being the 1,000-foot plunges of Elizabeth and Mission Falls.

In 1979 the Confederated Salish and Kootenai tribes designated 89,500 acres of privately owned tribal lands along the western slopes as Wilderness. This is the only Tribal Wilderness in the nation to be established by the actual tribe. In the words of the Mission Mountains Committee: 'These mountains belong to our children, and when our children grow old they will belong to their children. In this way and for this reason these mountain are sacred.'

The west side Tribal Wilderness is managed with a priority for wildlife. Each summer grizzlies gather on the snow fields of McDonald Peak to feast on swarms of cutworm moths and ladybugs. In order to avoid displacing these great bears, the tribe closes about 12,000 acres to all public use from mid-July to October, The closed area is part of a larger trail less region that serves to discourage humans from entering the grizzly's home during a critical time.

If you are not a tribal member, and are between the ages of 18 and 64, you must obtain and carry a tribal recreation permit, which entitles you to hike, fish, camp and enjoy the Wilderness as well as other Flathead Reservation lands that are open to recreation. The permits are available at a number of stores within and near the reservation communities of Missoula, Kalispell, Seeley Lake, and Thompson Falls. Despite the permits, tribal managers downplay regulations in favor of education. If people understand the need for no-trace camping and grizzly bear closures around McDonald Peak, enforcement problems will be minimal.

Along with the distinguished grizzly bear population, mountain goats, black bears, elk, mule deer, and white-tailed deer are also found in the Wilderness. Some mountain lions, martens, minks, bobcats, lynx, weasels and wolverines may be occasionally seen along with many birds, including bald and golden eagles, common loons, and woodpeckers.

The Mission Mountains Wilderness is on the Swan Lake Ranger District of the Flathead National Forest in northwestern Montana. Tribal west side From US Highway 93 turn east on the Mission Reservoir road at the north edge of St. Ignatius. Go east 3 miles, turn right (south) 1 mile, then turn left and drive the remaining 0.5 mile to the Mission Dam, campground, and trailhead. National Forest east side From MT Highway 83 (Swan Highway), 19 miles north of Seeley Lake, drive about 7 miles west on the Kraft Creek Road (FR 561). Turn right on FR 9576 about 0.5 mile up Red Butte Creek to the trailhead for Hemlock Lake Trail 607. 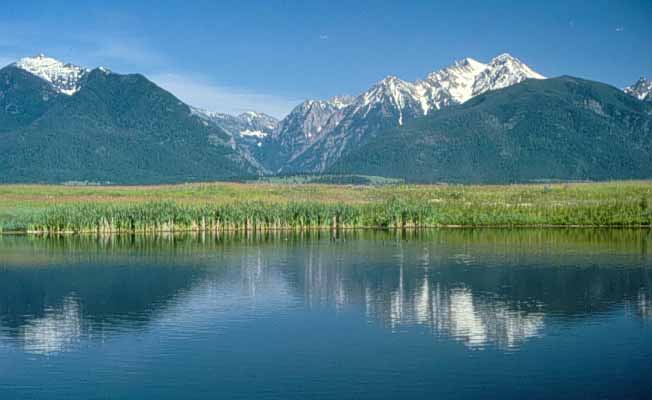